I always heard Netflix’s Black Mirror was a good show, but I never gave it a fair chance. I peeped the first two episodes of season 3; “Nosedive” and “Playtest”, which were both compelling episodes, but at the time I was caught up in a lot of other shows and just never came back to the series.

It wasn’t until Season 4 came out and everyone’s excitement peaked that I told myself “Why not?” and decided to dive into the series. And let me tell you…Great decision.

As a thriller, Black Mirror presents the benefits and challenges of our technological advancements and makes you question if the good outweighs the bad.

Season 4 is a great place to start. It eases you into what the series is about without any of the crazy shock that some past episodes (shout out to “Shut Up and Dance”), and the Season is relatively good.

“Crocodile” is set in a future that isn’t too far off from our reality today. The only major technological advancements I could see were the recaller that was used to capture past events, the ability to track human identities/information using photos, and the self driving truck.

Funny enough Pizza Hut already has plans to have self-driving trucks that deliver pizza (we really in the future now).

Here’s my issue with Crocodile and why I have it as my least favourite episode of the season. Mia who was so adamant and reluctant to hide the biker’s body in the beginning, becomes the world’s most psychotic killer.

And I’m trying to piece together how this happened. The biker is understandable, she was coerced and had no options, plus no one was around.

The death of Rob, I guesssss…can get a pass too. With the guilt and fear of being caught 15 years later when her life has completely changed would be a complete shock, even though she did a shoddy job of getting rid of the body by real life standards.

Later in the story is where things get shitty. I understand that she feels trapped; but the murder of Shazia, her husband, and for God’s sake a baby that we later find out is blind, all just struck me the wrong way.

Mia never seemed like the psychotic type there weren’t any indications that she had that quirk to her. All her murders just seemed senseless.

And it seemed she barely struggled with all of her murders. It came off as she just thought “Oh well, I’m in this deep already.”

The black and white filter was a cool touch and made this episode stand out from any other in the series. There was also a cool easter egg in it with the peppermint candy from Crocodile.

We don’t know what happened in this post apocalyptic time, but I figure that those “dogs” were probably cute little mechanical companions that somehow went rogue and eventually killed life forms.

Metalhead revolves around Bella’s survival. The hunt of Bella really showed the vulnerability of humans in contrast to the elite hunting capabilities of machines. All I could think was how Bella’s humanity was such a burden to her survival.

The dog that chased her could recharge it’s batteries, adapt without a limb, and hack anything it needed to gain access. On the other hand, Bella had to slow down for her friends, to know she wasn’t alone, her injury, and ways of gaining access to the house and car.

I do like how Bella used her wits several times to outmaneuver the dog though. The can of paint,  blasting the car speakers, and the rock throwing were all peaks of human intelligence and she eventually did defeat her pursuer, but it was a bleak ending to see there are still hundreds if not thousands of dogs left and her and her crew went through all that for teddy bears…smh.

Maaaaan, all I could think of when I was watching this episode was “Yo, what happens when she’s older and she starts…” and L-M-F-A-O, I guess the writers thought so too, because when Sara’s mom, Marie, decides to spy on her and catches her doing some grown woman shit I actually died.

It was cool how this episode challenged the relationship between technology and parenting. On one hand, Arkangel was helpful when it came to crisis situations like when Marie’s father was having a heart attack and it helped her clue in via her daughter.

On the other, it was invasive and would sometimes lead to you watching your daughter do drugs in the back of a van fit for abducting. And I liked how they incorporated the fact that Arkangel also affected the development of Sara’s brain as a child.

Since Arkangel limited her exposure, Sara wasn’t developing proper social responses and she had difficulty socializing with kids her age. Eventually she became violent which ultimately led to her beating her mother to the brink of death.

Tinder needs to get up on this cause it actually gets to the point of meeting someone. And I don’t just mean the sex part (although that is convenient), but you at least get to go on a date with someone and know how much time your relationship is meant last.

However, I do feel the idea of having a time limit on a relationship would never fly for humanity. For one, you’re leaving the relationship in the hands of a system that could be flawed, and two, if you’re like Amy or Frank what if you find someone you want to spend more time with?

Also, how shitty would it be to spend a year with someone you hate just so you can go through what the system thinks should be your testing phase? Every little thing would annoy you and you’d have no choice but to put up with it.

This episode was cool though, it really showed levels to dating in our current world and how sometimes you have to go through a lot of bullshit to get to where you want to be.

Also, it raised ideas of our world being a simulation…which really made me question the validity of my existence after watching it. 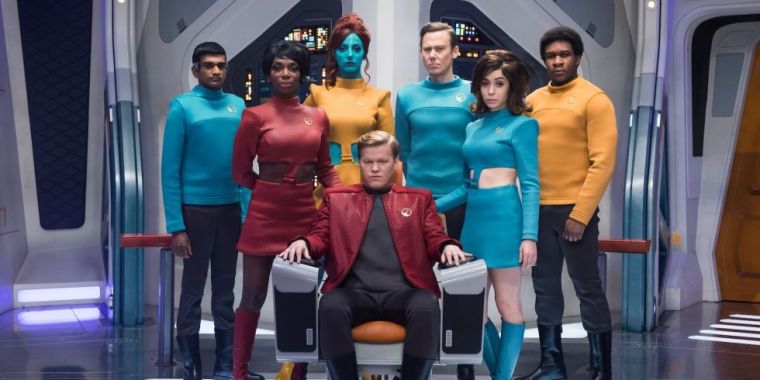 One of my biggest gripes with Black Mirror is that the thumbnails sometimes look like trash. A lot of the time they aren’t compelling even if an episode is fire.

That makes it hard to jump into the episode because you’re looking at it and you’re like “this looks like it’s about to be some BS.”

But when it comes to USS Callister, don’t let that dorky thumbnail fool you because this is hands down one of the best episodes of the series.

I actually felt bad for Robert because you can tell that all he wanted to be was accepted. He got bullied and stepped on at work and his socially awkward interactions led him to become an asshole.

And when he finally did get some shine for his brilliance from Nanette, who did like him, it got destroyed by another co-worker. But, after learning about the things he did to his digital co-workers, I was happy his fate was to rot in his own cold world.

There’s interesting concepts of space and time play out in this episode. Like can we exist in alternate universes? And can our consciousness be transferred into computers for entertainment?

Black Museum definitely takes the cake when it comes to the best episode of Season 4, it even stands up against the entirety of the Black Mirror series. Not only is the main story compelling with a great twist at the end, but we also get an additional two stories wrapped into one.

Each one of those stories could have been it’s own episode which says a lot about how well developed this episode was. It was cool to see all the memorabilia from past episodes in Season 4, like the tablet that Sara used to beat her mom with, and Robert’s DNA transmitter.

Consciousness was a big theme in this episode and it’s interesting to think that we could possibly transfer consciousness to other people and or things.

Essentially that would mean immortality. Personally, I hope humans never reach that capability for the exact reasons we saw in this episode. Being stuck in an inanimate doll for life would be beyond hell.

Don’t know what time period this is set in, arguably it’s in somewhat of a distant future since solar power looked to be standard, and the transfer of consciousness is something we haven’t achieved yet, but it was sad to see that race is still an issue in that time. The ending however was one of hope and justice so it was good to see as the last episode of Season 4.