Skip to content
Is Drake Lowkey A Creep?
Entertainment

Is Drake Lowkey A Creep?

By: Papa Minnow NOTE: This is not to condemn/slander Drake nor make assumptions about him or his life, but to simply present observations that have been made. Last year Drake […]

NOTE: This is not to condemn/slander Drake nor make assumptions about him or his life, but to simply present observations that have been made.

Last year Drake got involved in some internet controversy when pictures surfaced of him and Stranger Things actress Millie Bobby Brown took photos backstage at his Australian concert. She later went on to do an interview with W Magazine where she revealed that they often keep in touch and she asks for his advice.

This furthered reprisal across the internet as to why a 31-year-old artist would be in contact with a 14-year-old actress. And while my first assumption was not to sexualize their relationship, seeing that the two of them are in an industry where crossing paths isn’t so unfamiliar; it did raise public eyebrows.

In response to the internet’s assumptions, Millie took to her IG and posted about the nature of their relationship. 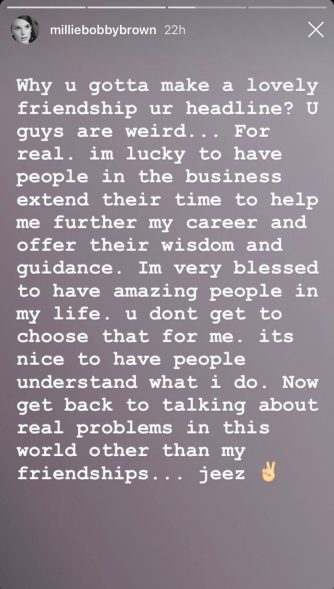 That wasn’t the only younger age controversy that arose for the Toronto artist last year. Around early September of 2018, reports from Page Six surfaced that Drake was seen dining in an Italian restaurant with 18-year-old model Bella Harris.

Harris, daughter of renowned music producer Jimmy Jam who’s done work with Janet Jackson, reportedly met Drake at his Summer Sixteen Tour at the age of 16. The two of them had taken pictures together as well.

Once again backlash ensued and in response to the initial reports, both Bella and Drake’s camp denied the two dining together as she was in NYC for fashion week. As with the Millie story I chalked it up as an industry thing and both parties denied initial reports.

Coming off an amazing New York fashion week, I feel I need to set the record straight… I did not dine in DC recently. I was happily working & dining in NYC everyday.

A couple of days ago, old footage of Drake on tour surfaced in response to the airing of the Surviving R.Kelly documentary. As with most outrage on the internet, people tend to dig things up whether for clout or general concern.

The video which takes place circa 2010, shows a 23-year-old Drake bringing a fan on stage during his set. It’s a routine he used to do when he first started touring. In the video Drake gets touchy with the young lady asking if her hair product of choice was Herbal Essence before hugging and kissing on her neck.

“Y’all gon’ have me get carried away. I get in trouble for shit like this. How old are you?” He asks.

After learning she is 17 Drake turns around as the crowd begins to yell.

“I can’t go to jail yet, man,” Drake says. “Why do you look like that? You thick. Look at all this. Well, listen 17, I had fun. I don’t know whether I should feel guilty or not, but I had fun. I like the way your breasts feel against my chest. I just want to thank you.”

After all that he proceeds to kiss her hand, both cheeks, her forehead, and her lips.

Around this time as well, Drake had a song titled It’s Been A Pleasure in which one of his bars didn’t age well by today’s standards. Back then it didn’t garner the attention it would have today for several reasons, Drake wasn’t as popular as he is today, Hip-Hop was in a different space in terms of size and audience, social media wasn’t as big, and this song was from the mixtape days making it a deep cut (relatively unknown released music). There was also several different versions.

Musically, a lot of artists have had some questionable lyrics in the past and of course Drake is not exempt from that. The line in question opens up his verse as follows:

It’s also no secret that on Drake’s album Scorpion, the Toronto superstar sings a ballad for a younger woman on the song Jaded. That woman was speculated to be Jorja Smith (I dissected the song on my Scorpion review), a UK singer on the rise who’s been featured on Kendrick’s Black Panther Soundtrack and Drake’s More Life project.

The two reportedly dated in early 2017 back when she was 19-years of age putting Drake at the age of 30 at the time.

On Jaded Drake also mentions how he could have mentored the younger woman:

“You have potential, I coulda shaped it
You went and caved in (ooh, yeah)
We coulda waited, I wasn’t rushin’, differences in ages
You’re old enough, but you’re still a baby”

Do these observations question how you view Drake?